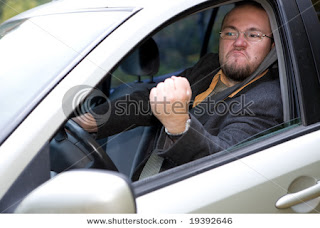 I've found that most men over the age of 40 are still courteous. They'll hold a door for others. Pick up an item that is dropped. Etc. Those much older (retired and have fewer places to be on time) might just let you ahead of them in a line.

But, put these men behind the wheel of a car, and they turn into something else. Flaming assholes.

Yesterday, my light turned green. Way green. A man turning left onto my street went on and turned. He was not in the intersection when the light turned red. It was red before he turned. Way red. Yet, his shirt and tie indicated he was important and had places to be. I, of course, waved my fist and asked what his problem was. My actions were met by a look of disgust. Interpreted by me, the NON housewife, as a look of superiority. His look said that he was a CEO and I only had a soccer game to get to.

No, I actually had to go to Target. So I could get some bonbons. To eat while watching my stories. As I was tooling through the main aisle of the parking lot to leave, another man, professionally suited, looked at me to size me up, and pulled out in front of me. See, the light ahead was green and his business was more important than mine. His SUV was much larger than mine, and I guess he figured that, combined with his CEO look of importance, was his green light to be an asshole.

Perhaps I was having a sensitive day yesterday. I might agree with that statement if such things had not happened before.

A few weeks ago, I had to take my cat to the vet. I'm sure I appeared to be the little housewife there in my old jeans and fleece jacket. Who the hell dresses up to take a shedding cat to the vet? Man in suit enters. Has poop to drop off. Asks if I mind if he goes first. That he has an important appointment. Then proceeds to do it before he gets his answer. He moves to the desk and starts yakking. And yakking. And yakking. Several minutes later he goes. I'm still standing there slack-jawed while he thanks me for letting him go first. I know my response should have been to tell him that he could not go first. Or to tell him as he left that I did not let him go first, that he just did it and he is a completely rude bastard. Imagine him behind the wheel of a car.

Is it time for the NON housewife avenger to put her cape on? Some pointy-toed boots just in case I need them?
Posted by Who you callin' housewife? at 6:32 AM