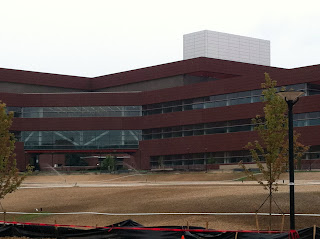 Penn State's own Death Star. No, the photo does NOT reveal all of the ugly. 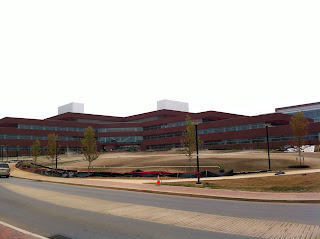 The photo is unable to convey the vastness. The grounds in front are huge. There is room for another such building on the grounds. It is high-maintenance field of grass.

The newest building on the Pennsylvania State University campus has just been revealed!!!

When did architecture stop being an art and become a competition?

When was it determined that a building no longer needed to fit the site or the surrounding architecture?

Who said that architecture today must be the fabricated equivalent of the middle finger?

Ah, the gilded world of the celebrity architect! What joy to draw fantastical structures on mammoth sheets of paper! What bliss to ignore all but oneself! What unimaginable heaven it must be to throw bricks and concrete and glass and metal into one huge pot and have it dumped upon a stretch of ground somewhere, anywhere!

These architects cannot imagine the faces of horror of those who must frequently enter or merely view the structure. They’ve signed off on the blueprints and they are off to desecrate another plot of land with their piles of bricks and cement and etc. Theirs is only to dream and draw. Fuck those who must live in the wake of their con(des)truction. Ooooh,. That was a nasty word. Fitting, though. If at least fifty percent of the viewing public does not utter that word at first glance, then the celebrity architect has not done his or her job.

Alas, no one wishes to build like the ancient Romans these days. Or, at the very least, the pre-war apartment-building architects that shaped New York and other great American cities. No. Today every damn building must make a statement. And each statement must be different from the statement on the adjoining plot of land. With each new building, we must hear the echoes of the architect’s chest pounding.

What we’re experiencing on the Penn State campus is an outright cacophony of colossal architectural piles.

And the newest has just been revealed. The Millennium Science Complex. For months and months, the construction had been hidden behind fences. And then, last week, there it was. Gleaming and raw. My screams could be heard well over the visual noise of this new building.

There is where one would go to experience pain. Tortuous pain. There can be no pleasure in this structure. This is the building of screeching metal, blows to the head and rivers of body fluids. This is where one would go to receive a gravel and glass enema, to remove limbs without anesthesia and bring the partially dead to be ground into pastes and animal feed. This is the place for general maltreatment.

Ah, even though a ruin, the Parthenon has aged well. The streets of Paris are lined with venerable, ivory edifices. Oxford teems with antique arched doorways. Such places are only improved by time. Such a future cannot be possible for the Millennium Science Complex. I imagine it will wane like a multi-million-dollar cereal box in the sun.

There is no room for age built into the celebrity architects’ creations. They are built for the now. The wow. Then it is onto the next wow and to hell with what they have left behind.

Now, if you’ve got an elderly aunt to dispose of or a redundant limb or a desire to fill your innards with shards of glass and rock, you know where to go to have your needs fulfilled: Penn State’s newest palace of pain.

I've never understood why big bangs have been chosen to represent freedom.
I hate noise.
I have a phobia.
Yes, some people hate blood. Some people fear needles. Some are scared of dogs.
Whatever.
I'm terrified of great big kabooms.
Show me a needle. Dandy. Fine. Take my blood. I don't care. Show me a needle and a balloon at the same time. I'll freak out.
I'm having many beverages before I go out to see the fireworks. Its the only way I can deal.
Please excuse any typos.
Pour me into bed later.
Posted by Who you callin' housewife? at 5:45 PM 1 comment: