Desperate for a new television show 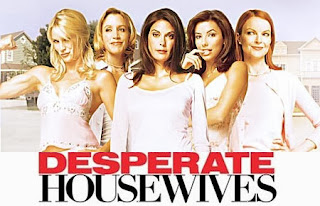 I feel somewhat sad this morning.

I finished watching the final episode of Desperate Housewives on Netflix last night.

The housewives have kept me company for more than two years now.  Once the hubby's travel picked up, his leaving town was not quite as bad when I had the housewives to keep me company after the young one went to bed at night.  We all had wine together and I could yell at them when they were being ridiculous and happy when life worked out well for them.  When things went south we could commiserate with another glass of wine and when there was joy and a celebration, we could celebrate with another glass of wine.  And when Bree was on the wagon, I actually felt guilty for drinking in front of her.

It took me a bit of time to find the right photo for this post.  Most of the photos were way sexy glamour shots.  While this was not uncommon on the show, most of the character were far more down to earth than "normal' folks on other television shows.  Often, they appeared on screen in sweat pants.  Sometimes they rocked them, other times not.

Sure, each character was a bit bigger than life.  Yet, I could relate to many of the situations on the show.  Why?  These characters were my age (or close).  These women weren't just being shown as some awesome cool teenager's bitchy, clueless mom.  Or some Wall Street executive's two-dimensional bitchy, clueless wife.  Or a running menopause joke.  Or a running PMS joke.  From kids to kidneys, I could relate.

Each trip for my husband was a poker game and a hit-and-run accident for me and my women buddies.  If I ever wanted to say or do something hurtful and completely regrettable, I knew they would do it for me.  When I wanted to move and hopefully improve my life, they moved with me.  And now they're gone.  Moved from Wisteria lane.  I went through the deaths of their family members and I could turn to this show when I was hurting from the deaths of my parents.

I didn't even know the end was coming.  I never bothered to find out how many seasons there were.  Those last 10 minutes of the final episode caught me by surprised. I found myself doing that backseat driver putting on the brakes movement.  My right foot could find no traction, no brake.  The screen went black and that was that.  I couldn't stop it.  Couldn't create a new season with my own desperation.

So, I've been through season one of Ugly Betty.  Good show, but it can't replace the housewives.  I am on the lookout for a new show.  It can't be a great show, because then my husband will want to watch, also.  So I have to find something good, not much man appeal, not full of phony Kardashians, and loads of episodes.  Any ideas?
Posted by Who you callin' housewife? at 5:32 AM 5 comments: