Those of you out there that know the Housewife, know her thinking on housework. Oil and water. I hate it all. I've never met a domestic chore that I like.
After a good couple of weeks in the studio, the Housewife had to make an appearance today to scrape off the crud.

I've included photos. Be damn glad I didn't take a "before" photo of the toilet. 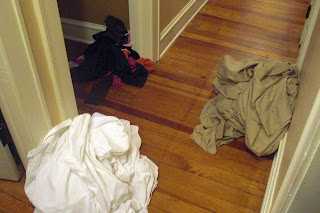 What the heck is a laundry hamper? p.s. this is only a small portion of the dirties. 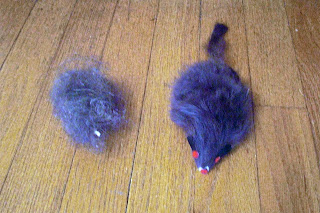 Which one is the dust bunny and which is the cat toy?
Answer: since I dug them both out from under a table,
they are both dust bunnies and according to the cat, the one on the left is more fun.
After laundry, bathroom cleaning and sweeping, I moved onto dusting. Somehow, it is a less productive use of time than watching paint dry. A complete waste of time, and I do know a great deal about wasting time. Dusting trumps all time wasting (non)activities.
And we're not even going into cooking. The Housewife does not go there! My cooking is generally unsatisfying and often dangerous to people and property. I've been relegated to clean up activities in my house.
And, hell, I just realized there's some ironing to do.
My blood pressure is up. Me feelings of adequacy are down.
How did those housewives of the past not just drop it all and run out in front of a bus?
Well, its lunch time. Soon all of this will be behind me for the next three weeks as the sh#t piles up around me once again. I'm going to enjoy wallowing in it. Until I don't.
Posted by Who you callin' housewife? at 8:40 AM 2 comments: 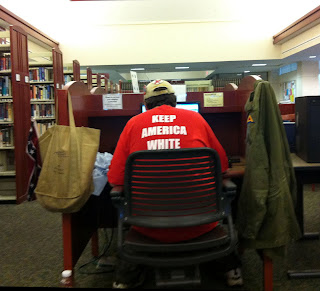 It’s taken me a few days to get around to writing this. I’ve been dreading even thinking about this again, but here goes.

Each Wednesday afternoon, I take my daughter downtown for her ballet lesson. Then, for an hour, I loiter in the public library. Sometimes I peruse the new books, but usually, I bring a few things I need to catch up on. Like a good little writer, I always have a notebook and pen with me. Unlike a good little writer, I rarely put what I have in my notebook onto my blog. Each week, I encounter some type of strangeness at the library, and I always tell myself I will blog about it when I get home. There are thousands of stories in the library (excluding the ones in books), and sometimes there are so many choices of characters, that I can’t settle on one to write about. Until now.

I had seen this guy once before, as he almost ran me and my daughter down while leaving the library. This day he settled into a chair in front of me and I could see his backside in all of its glory.

Today, the asshole arrives wearing a red T-shirt. The same one he wore the last time I saw him. He sits down at a computer station, pulls out a plastic bag and spits into it. He carries with him a great variety of things: a large jar of juice, tote bag, extra clothing, and a Confederate flag. And the shirt – well I don’t know what is written on the front, but the back reads, in large white letters, “KEEP AMERICA WHITE.” He wears a baseball cap covered with buttons. One button is for Penn State, which is crossed out with a handmade red “X.” A Confederate flag button, several others than I do not wish to get close enough to read, and, naturally, one with a swastika. He completes the outfit with camouflage pants, a wardrobe staple of society outsiders.

So, here in the public library, is a walking potential hate crime. My entire body shakes just being near this person. I wonder just what the hell this intolerant bastard is looking up on the computer. How to make explosives. How to tie a noose. Checking his Google stats on his popularity among white supremacists. I’m guessing that this man has been on earth for at least forty years. I cannot believe that someone who would carry their hatred on their sleeve (and tote bag and hat and . . .), would not have committed a hate crime in all of those years. Someone has no doubt suffered at the hands of this man. I’m suffering just by looking at the back of his hateful body.

Hands trembling, I took a photo. I expected him to turn around and eat me upon hearing the iPhone cute photo-taking noise. I packed to leave unscathed. It was time to pick up my Chinese daughter from ballet. I’m just assuming he wouldn’t appreciate a bit of yellow mixed into his filthy whiteness. I’m glad that my daughter was not here to see this. Would it have been a hate crime to beat him with my umbrella? I so wanted to borrow a Sharpie marker from the librarian, write “Keep America Free from Asshole Bigots” on my own shirt, stand in front of him and clear my throat. However, I don’t think I could have managed that without throwing up. And I would have so loved to decorate his racist face and shirt with my lunch.

There’s always next time, I guess. And with a conveniently located public library, I’m sure that time won’t be too far off.

I'm guessing that is what my readers are thinking about my blog lately. I've been negligent. I could say I've been tending to other matters, but the fact is, I've been wasting as much time as usual on useless stuff.
I'm trying to enjoy autumn. It's beautiful here in Central Pennsylvania right now (and I so rarely say that). But this year is just not the same. I keep thinking back to this time last year. Sometime during October I went to visit my parents, not knowing it would be the last time I would see my mother in her own home.
Right now, the weather is beautiful. The windows are open and I'm listening to the crickets chirping. I hear footsteps shuffling through the leaves. Halloween is not even on my mind yet, but I am already dreading winter.
It's a long winter in these parts. I'm sure there are some Canadians out there rolling their eyes, but really . . .
I'm going to need some help getting through this winter.
Somebody, please help me think of something positive about 5-6 long, cold months. Please!
Posted by Who you callin' housewife? at 5:21 PM 5 comments:

Sometimes, when I get bored, I Google my name.
Or if I really want to know what people are saying about me.
Regardless.
I was bored and curious so I Googled and discovered that a member of the Tea Party has my name.
The horror!!
I'm off to bathe and exfoliate and brush and floss and possibly treat myself for lice.
Posted by Who you callin' housewife? at 10:27 AM 3 comments: