While most of the folks in my town were hunkered down while Penn State students had their annual 24-hour State Paddy's Day beer-brawling vomit fest, this is what one of my favorite bloggers was doing. Taking back America from those Americans who claim to love America but really dislike (or hate) about 85-95% of Americans.

Go Monkey!
Posted by Who you callin' housewife? at 5:26 AM 2 comments:

"I think their names are Taronteo and Hepcat." My daughter starts a conversation midway. There is no lead in. No introduction. No warning.

"Who? What? What are you talking about?"

"I think their names are Taronteo and Hepcat." My daughter repeats. Once again providing no explanation."

"Who? What? What are you talking about?"

"Boys in the school."

"Maybe California. I'm not sure, Mama."

Is Hepcat a California name?
Posted by Who you callin' housewife? at 6:11 AM 2 comments:

Well, actually, I've been feeling a bit pissy lately. What with living in the northern lands and medical issues and missing my mother and what not. 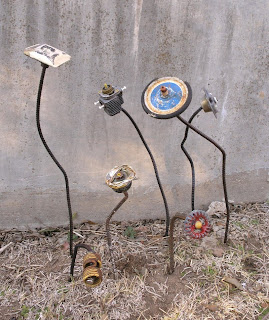 well, they just do something to me. These "industrial blooms" look like they're dancing to James Brown. So get that "I Feel Good," tune in your mind and go have a look at Paula Art's happy found item flowers.

See more of Paula's art and read her blog here.


I just saw something move! I swear those flowers are dancing.
Posted by Who you callin' housewife? at 6:34 AM 3 comments:

Well, it turns out that recent tests and scans have ruled out a cancerous mass on my adrenal gland, so it looks like something else will kill me first.

That's a line I've heard before. First with my dad when he was diagnosed with prostate cancer 10, no 15 years, um, a hell of a long time ago. With radiation and monitoring and pills and shots, the cancer would be under control for a long time. He was told that he would no doubt die of something else first. He's still among the living, I'm happy to say.

I, on the other hand, have NO idea what is going on with me. I've spent far too much time in labs, waiting, being stuck, driving. Far too much time in doctors' offices, driving, waiting, listening, waiting, paying up, and driving again. And there's the peeing in cups and jars and whatever. I can't imagine having one of those paying jobs and trying to take time off for all of this.

I'm damn tired of it. It looks like I've been narrowed down to a potassium-deficient patient for the time being. I don't know which syndrome can be applied to me yet. That might be determined in my drive, wait, appointment, drive, next week that will take up half a day.

But for heaven's sake, this time I will take a book! Ain't much good reading in God's waiting room. Once I strike up a conversation with the 80+ group, I often live to regret it. Not that that age group has nothing to offer. I'm not saying that. But sometimes you just want the conversation to end, and it doesn't. If I don't have a book, I will do my best to stare at the ceiling and avoid the magazines.

First, there's that germ thing. I'm not much of a germaphobe, but I'm going to fret a bit if I pick up a pre-moistened magazine. The 80+ set still believes its fine to lick their thumbs before turning a page. And the choices! Golf Magazine. No. Arthritis today. Not yet, thanks. And my personal fave -- Civil War Times. What the hell?!? Them times is over, right? At least north of the Mason-Dixon line. For heaven's sake, we need to acknowledge all of our horrible mistakes and move on. Not make a glossy magazine out of the damn war.

And you would think I'd feel young sitting among this group. No. I seem to blend right on in. I somehow went from early middle age and ended up on the Osteoporosis Show. Well, I'm not on the show quite yet. I'm in the green room waiting to be called in. And the green room is full of stale danishes and crappy periodicals.
Posted by Who you callin' housewife? at 8:00 AM 1 comment:

I suppose one or two people are wondering why the artist/housewife hasn't written much lately.

Well, not much art being produced.

Not much housewifery going on. Yeah, I finally got those Christmas trees down, but instead of cleaning up what they left behind and filling up those bare corners, I've done nothing.

What I have done: had several blood tests, peed into a large jar for medical inpsection and had yet another CT scan. Tomorrow, weather permitting, I get to drive an hour each way to see the doc. and see if I have something cancerous attached to my adrenal gland. Something IS attached to one of my adrenal glands, we just have to see if its growing.

School has been out for two days. I haven't been very creative in entertaining the child. At least she likes to read. I've been on the computer looking at real estate in other places. Cities. Mmmmmmm. Coffee shops and bookstores and ART GALLERIES. Yeah, like I'm going anywhere.

Frankly, I feel like I'm going to explode. But everything here is so slow and dull, it would be an explosion in slow motion. Very slow motion. It would take hours just for my bits and pieces to splatter on the walls.

Yeah, I know its only Wednesday, but I'm already hoping for a better week next week.

Send jokes.
Posted by Who you callin' housewife? at 8:39 AM 6 comments: