A Bang for Your Holiday Buck

That is the favorite tune of Central Pennsylvanians’ this time of the year.

Yep. It’s shooting season. Grab your guns, your bows and arrows, your best drinking buddy and head for the woods.

Need proof? Here’s a recent story from our local paper: A 13-year-old boy with a lift-threatening illness gets a wish. What could that be? A trip to Disneyworld. Nope. To drive a race car? Not even that. What could a boy from Central Pennsylvania REALLY want? His big dream is to shoot a deer. A great big ol’ white tailed deer in Iowa. His dream came true. He got together his bow and arrows and headed out where the deer grow big. After killing a 153-pound buck, the boy gives his grandfather a call. Grandpa’s comment to the reporter: “That just gives you a nice feeling; he did good.”

So that’s what matters here in the hills and valleys of Central Pennsylvania. Killing deer. It’s built right into the trash and recycling pick schedules. Their list of fall holidays: Labor Day, Thanksgiving, First Day of Deer Season, Christmas. What, no Veterans’ Day? Nope. That’s been quite willingly given up in favor of gittin’ them deer the Monday after Thankgsiving.

Here at my house, we’re trying to decide when to go visit the far-away folks for Thanksgiving. Do we get the kiddo out of school on Wednesday, or do we leave Thursday morning? You see, school is in session on the Wednesday before Thanksgiving, but closed on the Monday after. Doesn’t make much sense does it? At least not to those who DON’T hunt deer. Makes perfect sense to those that do. Why, if school were in session on the Monday after Thanksgiving, only girls would be in school. All the boys would be out in the woods with their daddies waiting to bag a buck.

This season (as with others in the past), I will not be sharing the same joy as those fellows out in the woods. I’m sure it’s just a fault in my character, but I just don’t get a thrill by taking the life of an animal. Not that I’ve ever done it before. Intentionally. (Those two deer were accidental. They just got in the way of a car going 50 miles an hour. I can say that neither party was thrilled in the least.)

This year (as with others in the past), a bit of my discretionary income will go to Toys-for-Tots, not the taxidermist. My halls will be decked with greenery and white lights. My holiday preparations will not involve cleaning a gun and hanging out at the ammo counter at WalMart. The only thing I’ll strap to my car will be a Christmas tree, not a carcass.

Enjoy the beginning of your holiday season. Enjoy your friends and your families. And stay the hell out of the woods. 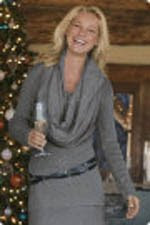 Photo from Soft Surroundings Catalog
The 10 billionth Christmas catalog came this afternoon. Oooooooooh. All sorts of products are waiting out there for purchase. But I don't have any room in my home for new purchases. My home is already full of CATALOGs.

For every product you can imagine.

Those clothing catalogs have got me going though. If I purchase some of these items, I'll have a dang good time during the High Holidays of Consumerism.

I'll be just gorgeous hanging balls on a perfectly symmetrical tree. I'll be just stunning quaffing magnums of champagne (every third woman in this catalog is lifting a glass). If I purchase the above dress, I know I'll look just like this radiant reveler. (In truth, I'll look like a drunk with a faded tire around my neck.) That Soft Surroundings catalog makes the whole season look merry and bright. Just raise a glass, hang some balls, and be a beaming beauty with your purchases.

Champagne and balls not included. Void where prohibited. Frankly, lady (me), just wear that tired old skirt and pilled sweater that you wear every damn year no matter how many catalogs are shoved into your mailbox.

Now, I'm off to find some twine and tie up the 4,000 catalogs and set them out for the recycling truck.

I can't believe its only the middle of November. I've got a catalog hangover already.
Posted by Who you callin' housewife? at 12:29 PM 2 comments:

Mixing it Up for the Holidays

I’m going to be mixing it up this Christmas. Its finally time to buy myself a stand mixer. I guess to most readers, that would sound quite normal coming from someone who plays for the ovarian team, but for me, it is just a bit ridiculous.

I was expecting some flack from the hubby. Unpredictably, he did not say, “but you only bake twice a year.” He would have been pretty close to the truth. Instead, he inquired about the price, and only flinched just a bit when I told him, “About $300-$400.” I didn’t need my backup argument, “I would bake a lot more, if only I had a better mixer.” I do believe this.

Hubby gets a cake twice a year; once for this birthday and then Fathers’ Day. The kid gets one for her birthday. And each Christmas, I bake a few cookies. Other than that, the beaters remain silent.

About 15 years ago, I requested a replacement for my grandmother’s hand mixer. I’m pretty sure that appliance was from the 1940’s. 1950’s at the latest. It could handle only the thinnest cake batter. I guess batter was a whole lot runnier back in the olden days. My mother gave me a Cuisinart hand mixer. Oooooooooh, sounds good, I thought. It sat around until after the warranty expired. Then it was cake making time. I put some softened butter into a bowl with a couple of eggs, dropped in the beaters, turned the mixer on extra low, and was instantly measled with bits of batter. A vast portion of the kitchen was also measled. I’m one of those people who likes everything on the counter and on open shelves for easy access (could be a result of laziness). My utensils sit at the ready in lidless canisters, my silverware sits on the windowsill in vases, every plate and bowl is on open shelves next to the cooking area. I was not pleased. Months after a round of mixing, I will find flecks of batter on the window, the cabinets, and every utensil I use.

I’ve stuck with this mixer for these past 15 years. As a result, my baking has dropped off tremendously. My kitchen cleanup time has been drastically reduced, however. But, I do miss baking. And I refuse to do it again until I get a mixer that understands that I need several mixing speeds. Low should be low. Medium should be medium. High should be high. Not every speed should be extra high. Actually, I never attempted to run this mixer on high. I might not still be among the living. Or at the very least, I would no longer be a resident of this planet. Extra low should not resemble the Tasmanian Devil all hopped up on every amphetamine gathered on every college campus over the course of two semesters.

I’m dreaming of mousses and puddings, cakes and tarts, cookies and macaroons. Not batter measles. How quickly can I have this thing delivered.

p.s. I would appreciate any advice on which mixer to buy.

Yes, that does make your ass look big 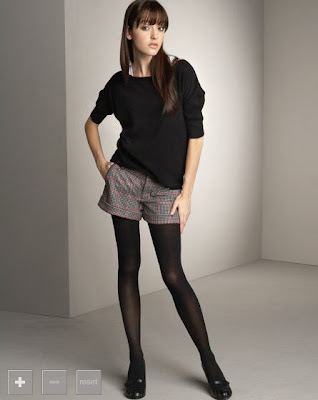 Oh, that hot new trend of wearing shorts over tights!

Not good. Unless you are shaped (or rather, not shaped) like the twiglet shown above.

A weekend in New York City will turn up hundreds upon hundreds of "fashionistas" dressed in these chunky shorts (light) over tights (dark). Hmmmmmmm.

If you've answered yes to any of the above questions, then yes, your ass looks big in those shorts.
Posted by Who you callin' housewife? at 11:08 AM 5 comments:

Tomorrow, I get to work at our local polling place.

I'll take some catalogs and magazines to flip though while I wait for 30% of the 700+ registered voters in my precinct to show up and fill in their little dots.

I'll make small talk with any voter who wishes to chit chat. No matter if they are Republican or Democrat. I'll share my snacks with them and talk to their kiddies while they vote.

At 8:00 pm, we'll shut the doors and count the votes. And write down in quadruplicate all of the votes for Mickey Mouse and Al Gore.

At 9:30, I'll arrive home, and hopefully will not discover that the voters of this country have tossed out all the progress made recently in an attempt to elect right-wing nut jobs and pave the way for a Palin presidency.

I'm lucky in that I live in an area of highly educated individuals. In my little neck of the woods (approximately adding up to 16 blocks), many folks are professors at Penn State University. Dinner parties often include discussions on politics and religion (backed up with facts). These are voters that do their research -- well ahead of time, not just in the days prior to the election. Dream voters. Ah, yes. And most in this area are liberal. I'm loving that.

What I don't love are those damn fliers that are crammed into my mailbox each day. Often four of these things show up at a time.

To put it bluntly, if you are getting any of your voting information from these fliers, don't bother to vote.

Its disgraceful that anyone would put their names on these fliers. I've heard better rumors from 3rd graders. And the photos! Each candidate looks as if they are on the receiving end of a phallic object.

Any questions about the candidates? Look for the answers on their websites. Can't find the answer there? Then it is unlikely that they have an answer at all.
Posted by Who you callin' housewife? at 6:13 AM 2 comments: